So, the groundhog everybody saw yesterday was NOT Punxatawny Phil!

You heard it here, my friends!

In truth, the real Phil wants nothing to do with people. He told me so himself. All the flashing cameras and stupid cell phones, the obligation to look for his shadow every year, and someone taking off with his welcome mat outside his den has put him over the edge.

But, we caught up with him, and he was nice enough to pose for my blog! Thank you, Phil! 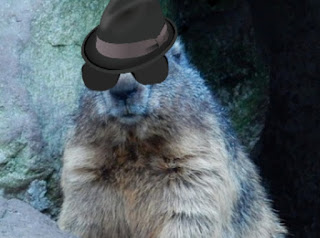 Anyhow, that's the truth of the matter.

Any other groundhog claiming to be him is bogus.

Just thought I'd give you the scoop!

Poor Phil, he just cannot catch a break, so I understand why he's gone into hiding!

We’re not sure we should trust what that imposter Phil saw.

Yep, we think Phil should be left alone!

That Phil is one great GH but we also would not enjoy being surrounded by gawkers. Hope you two relax and enjoy some adult feline and GH refreshments

Poor Phil. We don't blame him for hiding!

Wow! That was good of Phil to give you an exclusive photo shoot.