A Champion for Cats 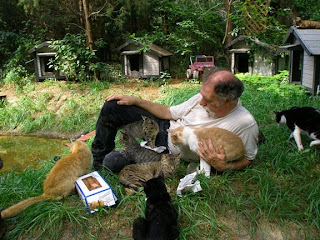 I found a man in Florida who turned thirty acres into a wonderful place for homeless cats. It's called Caboodle Ranch and every building on the property was built by none other than Craig Grant. He didn't always like cats. It was only after his son's cat Pepper had kittens that he fell head over heels over us! (complete with doughnuts) 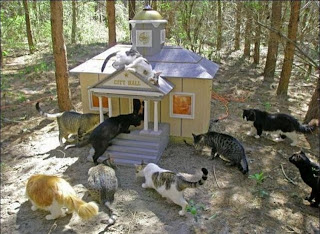 "Hurry up, I think we're late for the meeting!" 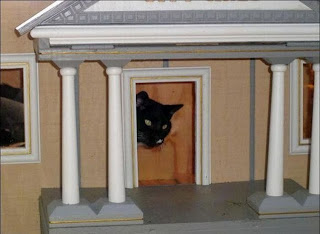 "Has anybody seen the mayor?" 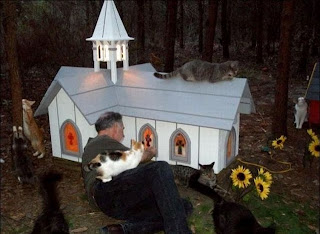 "Wow, is that real stained glass?" 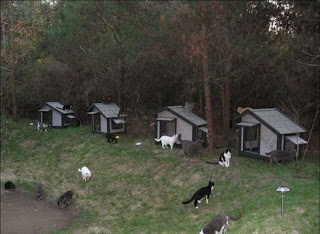 "George, this is just the perfect bungalow!" 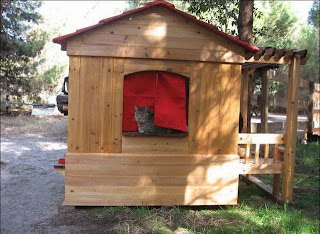 "Hey, buddy, you want to state your business?" 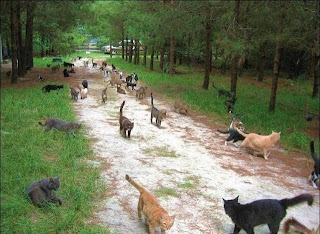 So, if you want to visit, all you have to do is go to Caboodle Ranch on Facebook or Google it and you'll get a chance to sample a little bit of Heaven!
--Tom 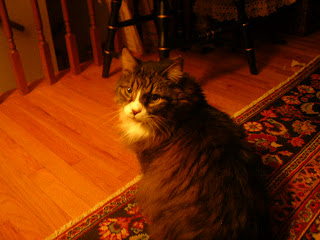 It's been a tough week.
Losing four beautiful cats from the catblogosphere was more than I could handle and I didn't even know them. I felt I did, though, through the outpouring of condolences and wishes for prayers and comfort. It goes to show how fragile life is and how everyone needs one another to help get through it.
So, what do we do? We garden, or we look at the sky a lot, the big, puffy clouds, or we do something to get our minds off that empty space that begins to grow if we gaze at it too long.
I take a walk through my church. We have what is called a twenty-four hour vigil where volunteers take turns and visit with God for an hour. I walk through, trying not to get noticed, skimming the marble floor on my pawpads, the lamplight and candlelight so soothing, and listen to the murmurs from statues silent by day.
Sadness always makes me reflect. I think about how there are things over which we have no control. I try to change my ways a little. I think that I will laugh more, listen and talk less, and remember my friends, never passing up an opportunity to make their day a little brighter.
~*~
--Julie here--Whether you're Catholic or not, here's something Tom remembers my telling him:
Growing up Catholic we were encouraged to "make a visit." Stop in the church and visit with God for just a little while. Today, churches that don't have vigils are kept locked and it's just not done so much any more. To encourage us to say hello once in awhile, a nun shared this with me growing up:
When you go by a church
Stop in and make a visit
So when you're carried in one day
The Lord won't say, "Who is it?"
Have a great weekend!
--Julie & Tom
Posted by Fr. Tom Fishworthy at 2:37 PM 4 comments: 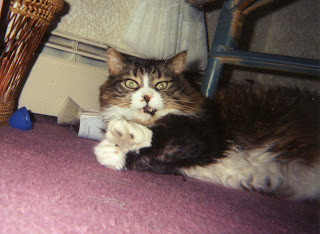 "It only costs a nickel to kiss my bonny Jean..."
Yes, I was singing at the party last night. As you can see, I'd been indulging in way too much nip. I don't even want to know if Jack and Will broke out the "holy water."
Mary Lou has been on vacation this week and as you can see from the stuff around me, the place is a mess. As devout as the priests are, they can be slobs like anybody else, despite the idea that cleanliness is next to godliness. It's mostly Jack, though. Will pretty much picks up after himself all the time, a hairball away from being a neat freak. Jack swears Will keeps a coaster in his hip pocket.
Today is ND--Nagging Day. Feel free to keep hounding--what do you know, a dog word--the person you love or a complete stranger, if you like, about anything your heart desires. We're all celebrating a day that makes it perfectly okay.
Finally, remember to look on catblogosphere.com (see my little black book) for the latest from all of the great cats who blog like me.
And don't take any wooden nickels, even if they'll get you a kiss.
--Tom
Posted by Fr. Tom Fishworthy at 2:57 AM 4 comments: 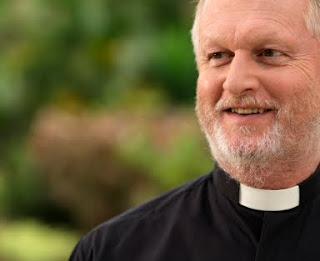 Who wouldn't trust this guy?
Here I am, all the time telling you what's happening at Temptation Parish and who's doing what, but I don't fill you in on the people I'm always talking about.
Like Father Jack, for instance.
I love Jack. He's been my rock along with Mary Lou ever since I got here. He's funny, totally irreverent for a priest, but don't kid yourself, it's his very lack of respect that endears the parishioners to him and makes him tons of friends. He's down to earth and never shocked at anything, since he's heard it all. He goes out of his way to where people congregate, high-brow, low-brow, and no-brow! (hehehe...)
He was once married and had a secular life, so he's a late-blooming cleric. Years ago, he married his high school sweetheart. I heard he was a big cheese quarterback on the school football team and she was on the cheerleading squad. They were happily married for a time, but then the news came that she had cancer and he lost her. Needing some space between his pain and events, he went into the service. He got along so well with everybody he found himself looking for the same sort of camaraderie when he got out.
It was in the priesthood and then high school again, this time an all-boys school and he taught history. He was famous for his practical jokes and the boys loved him. Ask him about the time somebody dumped chickens in his classroom!
He met Mary Lou there, too. This is where the story gets fuzzy. All I know is they were attracted to each other and something happened and he got transferred.
Anyway, he's my buddy and I love him to death. He's awfully busy, though and when Fr. Will got here, he turned much of the church stuff over to him, so, between you and me, Jack could play. While he does that, I'm taking care of Will knowing he's going to have awfully big shoes to fill when Jack retires.
So, that's it. Now you know a little about this holy man I call my friend. The same one who hides catnip mice around the rectory and whose jokes I steal (not really). Here's one: A grasshopper walks into a bar. The bartender says, "Hey, we got a drink named after you!"
The grasshopper says, "You got a drink named Murray?"
Have a great weekend!
Posted by Fr. Tom Fishworthy at 7:16 PM 3 comments: 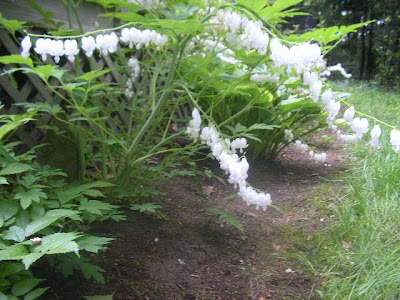