I know this guy.
Nothing like a good, old-fashioned
press kit photo to jog the memory.
I met him years ago but I don't remember
how or when.
I do recall wandering a long, overgrown drive, thinking how his crowd of admirers had turned into a company of weeds. But, that was the whole point. I stopped to take in the house on the hilltop. That, too, appeared left to its own devices.
You wouldn't think someone like me, short and covered in fur would have easy access to one of the greatest writers of our time and a recluse, at that. But, I did. All I needed was a doorstep.
"Well, what have we here?"
He tentatively unlatches the door to let me in. There are papers everywhere. Magazines. Books. One without a cover. I notice the door has a cat flap.
"Haven't seen you around here."
Mr. Salinger, I came specially to see you. I must discuss writing.
As with those who constantly converse with inner thoughts, he is in tune with mine.
"Write for the fun of it," he says, shuffling over to the cabinet. He wore his aura like a cloak.
What about recognition?
I knew this was a sore spot, but I had to ask.
"Well--" His voice became hesitant yet at the same time contained a vehemence restrained.
"It's something you need as a writer but can't control once you get it."
Oh.
There were sardines now heaped upon a saucer with tiny white flowers in a blue border. As I ate, I thought about what he said. It was true. If I became famous, it would change everything, every part of my life. I picked up the last crumb of fish.
It can still be enjoyable, can't it?
I looked up. He had left me alone.
I turned the corner and entered a cozy area filled with ever more papers, books, and pillows in dazzling, reflected light. My famous author and benefactor was absorbed in his work. There was a calm, as if he were some creative sculptor absorbed in the modeling of his own imaginative clay.
I turned to leave.
"Write for the joy," I heard behind me.
I smile as only a cat can, with backside for emphasis, a gesture to which he can undoubtedly relate.
Rest in peace, kind sir. The sardines were delicious.
--Tom
Posted by Fr. Tom Fishworthy at 2:58 AM 2 comments:

DO Try This At Home!

I am so excited! You wouldn't believe it, so I'll tell you..but first, I want to welcome my new friend Cory..just in time, 'cause we're talking about food!
Today, the housekeeper Mary Lou put together this special treat just for me:
A Gizzard Smoothie
1/2 -1 lb. of cooked chicken innards
1 cup chicken broth
1 cup cooked rice
Add each ingredient separately to (a really loud) blender and chop. The more chicken broth you add, the "smoother" it becomes. There are still those yummy, healthy bits of chicken that I love!!
I didn't let on, but after being so indulged, I would have done absolutely anything I was asked--including the complete annihilation of all mice in some third world country.
Will walked by, said, "Yum!" and kept going.
Enjoy!
--Tom

It was Mary Lou's birthday yesterday. We had a little party last night, but all I have is this picture of the cake with some strange woman. A ghost, maybe? Jack insisted on using his throwaway camera and it looks like a cross between a birthday party and a seance! "Happy Birthday to you-oooooooooooooo!" Okay, okay. Mary Lou was very happy. She cried at her presents and hugged everyone who could make it and the rectory almost burned to the ground. Will (I think that's his hand) says next year to make it just one candle instead of enough to start a bonfire.
I like parties. As long as I'm not stepped on. What makes them especially fun for cats is that people bring all sorts of smells with them. So any get-together becomes a smorgasbord of savory whiffs or not so savory. One time there was a new parishioner. Although he was nice, I could smell something very metallic and sour. It turned out he was wanted by the authorities for a crime having to do with washing money or some such thing. I get confused.
I made my rounds especially to where Pat Gubbers was sitting. In spite of her comb-over and spider web earrings, I really think she's sweet. She deliberately dropped food so I could find it under her chair..
--Tom
Posted by Fr. Tom Fishworthy at 5:34 PM 2 comments:

Let everything that has breath
Praise the Lord.
--Psalm 150:6
I have reached a cat's nirvana beyond belief. My ecstasy at the mere thought that such an organization as AFRMA exists, sends my blood racing and my dreams into delighted fantasy!
To those at the AFRMA, I am begging on bended knee, all four of them--alright, make that two--to be on the Board of Directors. Wouldn't that be great? Coming up on January 23rd, they're having their annual convention in Riverside, CA. I can't go, but you can bet I'll be there in spirit!
The organization started because rats are always getting a bad rap. No, they do not carry bubonic plague (that was during the time when human waste floated around in mud puddles and cats developed their fear of water). According to the folks at AFRMA, rats are playful, use litter boxes (that's a new one--probably hit their target better) and they cuddle with their owners like cats. The cuddling is where I draw the line. But, I shouldn't be so mean.
You see, they only have a couple of years to live. I heard the rat life span averages only two, that's right, two years. Hold up two fingers, Vinnie! What would I do if I met a rat? Introduce myself, silly!
Another meow-out to new friend Brian, a South Carolina cat! Speaking of cats now, call me crazy, but I think Vinnie is trying to curry favor with the housekeeper. He heads over here totally uninvited, but so far hasn't been let in. Thank God. One cat around here is enough.
Father Will's going to be gone for a few days.
--Tom
Posted by Fr. Tom Fishworthy at 6:30 PM 2 comments: 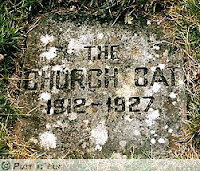 When I saw this photo, I felt a chill down my back.
You see, there was the original church cat, Tom who arrived at St. Mary's Redcliffe, Bristol in England so many years ago.
One day, just for the heck of it, I Googled church cats to see if I could find myself and I came across his little grave. I couldn't wait to find out more and once I began reading, I forgot all about me. I could only imagine how cute he must have been.
You see, I never came to Temptation as a kitten. I wandered here after becoming a full-grown cat. For that reason, I was very lucky to have caught the eye of animal lovers, particularly those in the parish. What if Mary Lou or Jack hated cats? I don't even want to think about it.
Anyway, back to little Tom. It's so sad. It was said that he used to listen to the organist play and always attended services. He also liked the taste of pigeon!
There are quite a few church cats around, can you believe it? I think you'll enjoy all the sites I've added to my address book which include Purr-n-fur, Church of the Advent friends and those in Richard Surman's photos.
And..to St. Mary's Church Cat Tom, rest in peace. Give me a sign sometime, like blow out a candle or something. I'll make sure the organist plays a sweet hymn just for you.
--Tom
Posted by Fr. Tom Fishworthy at 12:11 PM 5 comments:

Airs Above the Ground

You didn't know my spiritual connections would enable me to levitate, did you? Mary Lou threw some morsels on the floor for me to eat which is not unusual. Rising up from the ground due to anti-gravitational ecstacy, is. Actually, it's the way the picture was taken, me against the white linoleum in the rectory kitchen, her roosters and roses rug out of the shot.
Speaking of Mary Lou, she has a birthday this month. Nobody knows how old she is except Jack, and he's not telling. I think she's in her fifties, younger than Jack and a heck of a lot better-looking. Just kidding!
So, be good. We're doing an evening prayerfest Mass on Thursday to help people keep their resolutions. Mine is to remember always to say hello to new friends like Everycat and try to be kind to Vinnie Blackwhisker even though he's living in sin.
If you need a quick Hail Mary, let me know.
--Tom
Posted by Fr. Tom Fishworthy at 2:22 PM 1 comment: