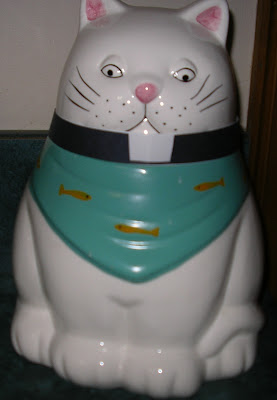 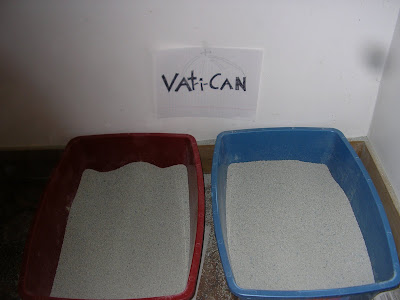 People around here have been up to no good!

I think I know who's behind it, but the thing is, nobody ever owns up to anything. I know it's not the parishioners or the church group, because they're not here at the rectory long enough to get into this kind of mischief. It reminds me of something about the devil and idleness. How about boredom? The old fork-ed tailed critter must be cranked up now!

As far as the litter box room is concerned, which, by the way is located off the kitchen toward the back--one heck of a place for it, the sign appeared the day after the snowstorm.

A cat notices a lot of things, especially at floor level. Look out, if the snow lasts any longer, you'll start seeing pin-ups by my duty station.

So, my furriends, as you're looking out the window, be sure to keep an eye out around the house. You never know when somebody tries curing cabin fever with something silly! 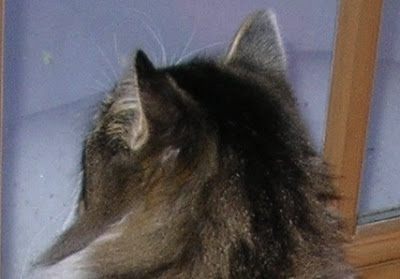 P.S. I'd like to know what the pope would say about the Vat-i-can, not to mention the liturd-gy!

Cheers and a toast by the fire,
Tom
Posted by Fr. Tom Fishworthy at 4:11 PM

Don't worry about the Pope and the Vati-can, I'm pretty sure he has his own bathroom!

We can't even get past "liturd-gy"! HAHAHAHA
Sam is laughing so hard that he's droolin' and I had to yell, "MOM, MOM, come look!" Now she's gaffawing like there's no tomorrow.
xoxoxo

MOL! I hope your human isn't starting to go off the deep end, with all that cabin fever!

we see the symptoms of cabin fever setting in there. keep an eye out for funny noises and hysterical laughing. at that point tell the bean to get the mail and lock the doors !!! MOL !

ha ha - M is laughing so hard her sides hurt!!Your staff has a bad case of cabin fever - no doubt about it. Thanks for making us laugh and helping with our cabin fever.

My precious, most lusted after, Tom...I don't know why I'm supposed to tell you this, because "I" took what you said very seriously (oh yeahhhh, babyyyy), but Mom seems to be having problems breathing now. She keeps snortin' this strange down-in-the-belly laugh. What's up with that? Doesn't she know real panting when she sees it?
Get the wine glasses out, I'm on my way ~~
xoxoxo

Oh Tom! You live with some funny humans!!

Very bad case of Cabin Fever Tom!
We hope you and your beans get some sunshine soon!
~ The Bunch

MOL! Yes, Tom, the humans do tend to get a little batty when they get trapped inside for too long. We pray you get some warmer days real soon!

I believe things did get a bit out of hand, but the sun was out, it was warmer and we had a great Super Bowl game, so we're all back to normal again.

One of the parishioners insists on having Jack hear his confession in the rectory tomorrow night. Sounds serious. I can't wait!

Oh I wonder what pope will say about Vat-i-can, too :-)

Thank you for visiting my blog. Very very nice to meet you!!

MOL!!! That has us and our Hooman going =^_^= she loves the treat jar collar and I wouldn't mind using that can hehe purrs2u
Luna & Zulu