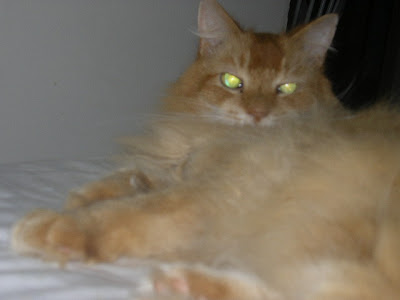 Here's a sight that got me tingling in my claws and wishing cats could wear Foster Grants!

I came across this picture of Vinny with laser eyes and I couldn't believe it. I don't think I've ever seen him look so powerful and heaven-like, especially with his bountiful furs. To think I once called him a golden haybag, tsk! tsk!

This look can be very celestial, the kind that fires up halos and creates strong sun rays across a marble floor and empty church pews. I'm thinking maybe it's Vinny who should've sat in the confessional with the priests instead of me. With those eyes boring through to the soul, all sins would be on the table.

Vinny was smart. Nine lives? He could multiply those by two and get one left over. He was always getting out of scrapes in the nick of time and I know those eyes must have given him the edge over the tough cat down the street, even though it turned out they didn't fight. Hey, who would fight someone who can cook your innards with one glance?

Anyway, I wanted to share this picture 'cause I think it's probably the only one I have of the old boy that shows him in the best light...light, get it?

By the way, Patsy's been over here at the rectory so many times, I've lost count. As you might recall, she was Vinny's mom. I've heard a lot of sniffles and offers for me to go over and keep her company. I'm relieved that she hasn't taken anybody up on the offer. I don't want to be around Vinny's things. I'd rather curl up on my pillow and dream of fun times.

Have a good weekend!
Posted by Fr. Tom Fishworthy at 4:51 PM

I hadn't seen your blog all week—my bad—so I missed your terrible mews. My heart cries out for you and Patsy and Julie. Sleep tight, Vinny, until we all meet again. And, yes, I still believe cats go to heaven, regardless of what they told TW years ago in Sunday school.

Vinny was such a beautiful fellow! I am sure he is watching over all of you.

We wish you and your family a very happy weekend.

WOW!! Vinny had the 100-yard laser stare down pat. So THAT'S the two new stars we saw last night...

Lasers are very powerful things. It is part of our kitty magic, and Vinny knew this.

Vinnie, what a beautiful and powerful boy he was! Me and mom love to read about him. Those lasers could cut a mountain in HALF!!!

Lasers eyes are so cool, and dat is a bootiful picture of Vinny. What a handsome boy.

Vinny was a very handsome gentleman cat - his furs looked very lush and extra floofy. We think one flash of those powerful lasers would
have had us confessing everything we could think of - even if we hadn't done it!!

Vinny was a super handsome ManCat!

That really is a great picture of Vinny. Get your snoozing done!

Wow, Vinny had some SERIOUS lasers! We love your memories of him, and enjoy when you share them with us.

Have a great weekend.

Vinny sure had some powerful lasers...and he knew how to use them!!

So when there are two lazer lights shining through the clouds, it's probably Vinny, my cats think so !

What shiny eyes you have, my dear!

And thank you for stopping by Kittens 'n Things and wishing purraying Billy well.

We appreciate your thoughtfulness.

Awwww ... Vinny was very a special boy. He is beaming down on us from Heaven, for sure.

Powerful lasers if there were any! I am sure they served the handsome Vinny well. RIP, until we meet again, Vinny!

Vinny was a handsome cat, but most of all he was your friend. And you miss him.

I love what all of you have said! I couldn't ask for a more supportive group of wonderful people in the world. Thank you so much!
Purrs 'n hugs,
Tom
xoxo

The ape is typing this whilst wearing sunglasses to protect her from those lasers. This is a glorious picture of Vinny, he looks like a golden, fluffy cloud.

Now Tom, you look after Julie please, both of Take it easy both of you.