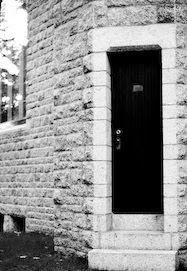 I like doors. I think most cats do. If they're open wide, it's even better, no matter which side you're on. This is one of the many back and side doors we have around here. It's not used very much. 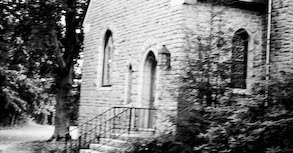 Here we are around the back of the church. This is the door that leads to the sacristy where the priests started the whole idea of layering (bet you didn't know that, he he!) with one thing worn on top of the other and prayers in between.

This was the door left open on that fateful day when Father Will got the bejesus scared out of him...

From A Temptation Tale..

Already late, Will rushed up the steps of the church’s back entrance which faced the rectory. As he pulled open the door, the organ music of the morning’s service roared over him as only age-old pipes can. Tom slipped in but Will stopped on the threshold.

What day was this? Did they somehow see him coming and decide to “play him in?” Maybe the organist just wanted to get things started. Any kind of music, rising slowly, had a soothing effect on those who waited. Nuzzling notes calmed the impatient for what was to come. He could picture each parishioner facing front, shoulder to shoulder and focused. He had missed the warming up exercise. Blasted by sound on top of being late, he became even more rattled, not to mention cold. In his haste, he had forgotten to throw on a jacket.

He strode over to the cabinet that contained everything he needed. He had to be quick. Pulling out the scapular drawers, he lifted out an amice and adjusted it on his shoulders with a quick, requisite prayer, then the alb. It wouldn’t take two seconds and a couple of prayers, he thought, to put everything on over his clothes. As he fumbled with the cincture, he heard the voice of Jack addressing the congregation in welcoming benediction.

He had to stop and think. Did he say something last night about taking the Mass for him? At the time, Will was only half-listening. Obviously.

Feeling ridiculous only half-dressed and standing there, he began to take off each piece of religious garb and put it back. He latched the cabinet door.

Enjoying a reprieve and relieved that he hadn’t embarrassed himself, he barely heard the sound of squeaking hinges behind him.

In his haste, he had flung the back door shut when he entered, but it remained ajar. He found himself face-to-face with a total stranger just as startled as he.

He wished he still had on at least a few holy items for Mass. It would give him some security as he stood there, wondering what to do next. Regaining his composure somewhat, he decided to speak.

“Is there something I can do for you?”

His visitor stood there with the late morning light behind him, blocking the doorway. In shadow, his features were indistinguishable. His manner indicated an uncertainty as he mumbled something and strode toward Will. He was remarkably deft in his movements.

Will stepped back. He noticed how everything about the man was dark--his hair, overall clothing, and shoes. A sinister harmony approaching the priest. As he drew closer, Will could see into his eyes. There was no expression in them whatsoever, not that he expected any. Either the man had a purpose that was all business or Will was in big trouble. With fluttering stomach and trembling knees, he was about to find out.

The man was older than he, that was obvious. He was spindly, too, and had a strange smell to him, reminding Will of cloves. There was a dampness to the fragrance. It was amazing that in a matter of a few seconds, the mind absorbed those details that had absolutely nothing to do with determining either one’s survival or one’s demise.

For some strange reason that Will couldn’t fathom, the man was keeping his hands in his pockets and doing more looking around than anything else. He would give Will a deep look, then take in the cabinets and check out the rest of the room. As his head turned, turtle-like, his long neck stuck out of an oversized sweater, a thick wool number with rolled up sleeves.

Jack stopped talking for a moment. Nobody moved. The altar’s back room was still as if they were both waiting for something to happen.

The muffled voice of Jack resumed. Will found a strange reassurance in it. He backed up in that direction as the man advanced toward him. As Will moved, the stranger moved. Will watched him then ease around the table, light and silent on his feet.

He was almost within an arm’s length of the priest. Will was scared. He got closer to the sanctuary door. Trying to keep calm, he was picturing the knob in his head, attempting to figure out how to open the door, with it right behind his back. Would he turn it left or right? Should he just turn quickly and pound on the door and yell? What if the organ were to suddenly erupt and nobody heard? He decided on gambling with the doorknob. He reached behind him.

The stranger, discovering his intention, stepped forward more quickly and, as he reached Will, a familiar voice called out.

~~~~~> Let us know if you enjoyed this excerpt. Hope it didn't add to your wintry chills!

Oh my, yes, I enjoyed that very much!!! Y'all have a wonderful weekend!

We enjoyed that - is there more to come - we hope so.
Luv Hannah & Lucy xx xx

We were getting very nervous - what will happen to Will??? We can't wait to find out!

Yes, that was a wonderful excerpt! Will you be posting more of the story? :)

Have a great weekend, Tom and Julie!

You guys are so nice, honestly! I'm glad you enjoyed it. It's always good to get feedback 'way before the book goes out in public, he he! This is just a small bit. I have to apologize for its length. It's longer than I like a post to be, but the suspense had to build!
Anyway, thanks for being such a great audience. Mmm..by the way,
the stranger looked awfully familiar to me. Creepy guy, too.
I won't be posting any more excerpts for awhile. But, as we get closer to publication, you'll see more bits and pieces..<3
Thanks again!

WooHOOOOO! We are enthralled! Mom of course had to read it to us, but boy, are we ever hooked!
I really like to look at Tom, too....but shhhh, don't tell Sam that.
xoxox

I had to come back to say what the no-spam word was..you'll love it: miercat

Oh! You left us hanging!!

OK, Mama and I are home alone tonight and now we are a little scared! Looking forward to more ...

Theese was excellent and full of suspense...and thanks so much for your nice Gotcha Day wishes.

Turn to the next page... purrplease...
cannot wait too long!

We cant wait to hear what happens next!!

We loved it and can't wait for the next installment!

That really was good. Just don't know how long we can all wait for the next chapter. The suspense is building.
Hope you have a fantastic week end.Take care.

Hi! Just found you from the blog hop. Love Father Tom & all your photos! The story is great so far. Looking forward to reading more!
Purrs ~ Jill