A Little of This 'n That

First, let me tell you that the editor was thrilled with all the photos (ahh...yeah, we picked the best ones we had showing our Maine Coon deliciousness!) I have to tell you, though, acceptance is one thing. Publication is another. The photos are scheduled for November, I think we already told you, to go with a story entitled "A Maine Coon Morning." It's about finding a bunch of old geezers guys sitting around in a general store talking about the one man's cat that died. It has a little twist at the end which the editor really liked. One of our other stories had to be rescheduled for publication, but it's been accepted. Yay! Just don't know yet when it'll be in print so we can share it with you.

Nothing else new, really. We've been watching the leaves being blown around, catching autumn whiffies at the window and cuddling up to stay warm on those crisp, chilly mornings that are coming fast and furious. Well, maybe not furious, but wooly caterpillars I've talked to say to make sure there are plenty of blankets. 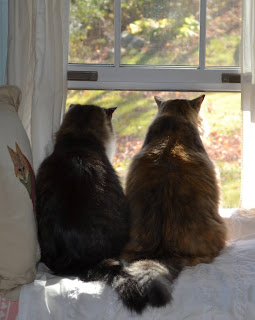 Taking a second look at this photo of Bridget, I think she's losing some weight. Maybe it's just the camera angle. Don't tell her I said so! She likes to think of herself as having a willowy fizzeek.

Speaking of camera angles, look at the housekeeper's elephant leg!! She went to her doctor vet the other day and when she came home said she'd forgotten she wore her cat sox. But, he didn't say anything. Must not be a cat man. 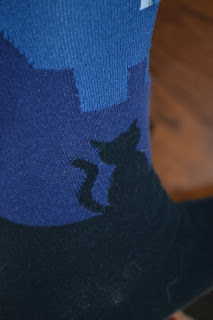 I'm afraid I've come to the end without any more to say. After all, we can't let life get too exciting and out of control, can we?? Hahaha!

We can't wait for your new stories!!! it looks like you're enjoying some good BirdTV!

Oh yes, I was out on Saturday to get a haircut, and I wore my cat earrings, a cat scarf, and cat socks...which ended up with my shorn hair stuck all over!

I know from my late Brother Ivan, Maine Coons have the best stories!

I can't wait for your story to be out, keep us posted Tom! The 'housekeeper' might want to change docs, who wants one that isn't into cats?!

Something outside sure has your interest. Those leaves must be really entertaining.

You and Bridget look very content in the window. Congrats on your second story being accepted.

That window looks like a lot of fun ladies. We cant wait to read the next story

We like your housekeeper's socks. Of course, we ARE act people. XO

We hope we can read the story! (Or have our mom read it to us.)