Hi, there..
Another pre-Tuesday in the works. No "M" word today!!

I want to talk about all the names I've been called and just names in general, quite the variety! Then there are those nicknames people love to come up with: 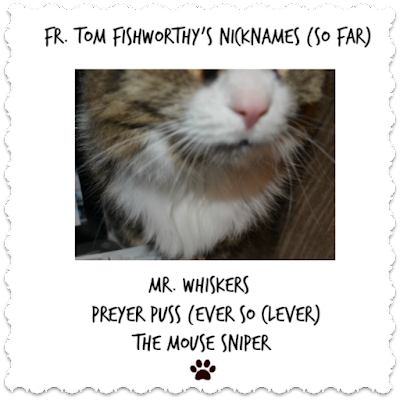 I kinda like Mouse Sniper. That came from an Army friend, who thinks in those terms. He told me once he had a friend who called his cat Hoosgow. I thought it was cool and he's probably the only cat on the planet with that name. Brig might be more a dog's name, haha!!

Cats' names can come from any of these:

A cat's coloring
Temperament
Role in the house - (or in the parish, in my case, fish having a double meaning for me)
Named after a person
After being rescued - Lucky or Hope
A boy or girl's name
Or named after a candy - Like Truffle! 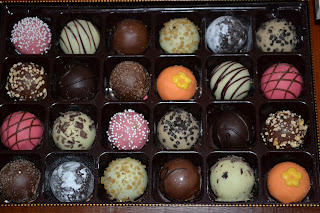 Finally, I'll leave you with the question: if the cat's name is Nick already, can he have a nick-name, too?

Oooo, we like Mouse Sniper, too! We have nicknames but some of them are too mushy to share, except for Viola, who is also called The Baby. She hates that name.

"The Mouse Sniper" is an excellent nickname!
Da Boyz have many nicknames, but most often called Door Stop (Chili Bruce) and Slim (Manny).

My cat Zeke is actually named after the biblical prophet Ezekial! True story! He is very good at prophesying, especially giving advance warning if someone is coming to the front door!

You know we love the name Truffle! Mudpie got her name because I think chocolate-related names are purrfect for torties :)

Mouse Sniper has quite the ring to it!

Each of us have various nick-names. And yes, Nick would have a nick-nick-name! :)

I had so many nicknames for the boys that is a wonder they knew what they were really called.

The more nicknames you have, the more loved you are.

We have LOTS of nicknames, but our mom and dad say that means we're loved LOTS. :) - Gracie and Ava