Bracing Myself for October

Hey, I'm NOT that fat! Quit fooling around! Now I forgot what I was going to write about.

Oh yeah - September is coming to an end and I'm getting anxious about v-e-t appointments that I spotted on the calendar for October. One to the regular vet for a checkup since my ear is bugging me and the one at the end of the month is with the cardiac guy. Yes, I have a heart! You don't need to check it! I get so cranky and it starts as soon as I get stuffed into my carrier and put into the car. Then the engine gets turned on, vroom! and I go ballistic. I make my displeasure known, for all the good it does. 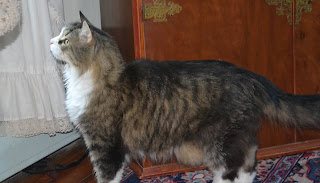 Meanwhile, with that on the horizon, I sleep with one eye open, stay alert and as soon as I hear that wire door screech, I head for my hiding place. Now, the housekeeper thought she'd be real smart when she unfastened it by coughing to cover the noise. Nice try. I heard it anyway!

So, that's what's coming up for me. Penny is still hissy and growls. The housekeeper said it might be because she had been abused. I never thought about that.  How awful! She also said she saw a Jackson Galaxy episode that had him saying when a cat wraps its tail around itself, it's a way to feel more secure. Could very well be. Maybe it's good the original owners weren't found after all, and she came here.

When I see her like this, though, my heart melts. She's so tiny! I know she doesn't mean to be mean and will be a good furriend for Bridget and me. It'll just take time. All right - clock's ticking! 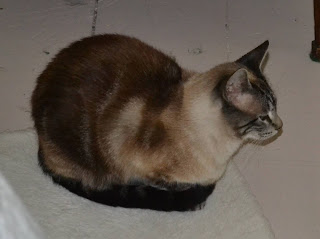 Hope you don't have any October appointments you're dreading!

Have a happy Monday!

Tom, we hope that if you have vet appointments, they go swimmingly and the housekeeper only scheduled them to hear your singing voice!
Penny is probably used to being on guard 24/7, so it will take awhile for her to decompress. We've had Sweetie in her own apartment since Mid-March, and it doesn't look like she will welcome any other cats, but we'll keep trying.
Da Boyz are very friendly; they want to be with every cat they see...whether the other cat wants to or not...

Yep, I have an October Vet visit coming up too, yikes! We hope sweet Penny learns to relax soon.

October seems to be vet month, consider yourself lucky, our rescues are getting snipped (neutered/spayed).

How rude of the Housekeeper to make you look so portly in the first photo. I am sure you will plan a suitable revenge. I hope your vet visits go well.

Tom, none of us like going to the vet either...but we hope your visits go well. And we hope Penny becomes more comfortable and stops hissing and you all become good friends.

We're sorry you have that vet visit coming up, Tom. Gracie and Ava just had theirs, We hope yours goes well, pal. And that Penny gets more comfortable there. XO

Tom those Vet appointments are no fun and they are a real pain for our parents with Covid going on. At least where we live. Poor Penny we know she will come around but it will take time

Good luck with your vet visit. Paws crossed for a purrfect checkup. Hopefully Penny learns that she's safe with you and doesn't need to be hissy or defensive. 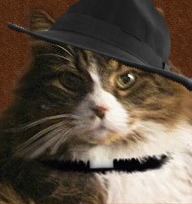 Greetings!
I thought it would be great to have a parish cat, name him Tom Fishworthy and create this entire congregational world with him in the center of it all. He's cheeky, funny, has a great imagination, so lovable and is a cherished member of all faiths.
He's on here every Monday. For daily postings, go to Facebook @FrTomFish
Purrs,
Julie Mackenzie
Housekeeper & devoted minion

**ALL CONTENTS OF THIS BLOG ARE COPYRIGHTED** Please ask if any use is desired. Thanks.