I made a discovery just yesterday.
Did you know when you go to type "LOL" but you're at the wrong keys next to it, it comes out "KIK?"

Silly, I know, but I had to tell you. That's in case you didn't know already. Inquiring minds need to be satisfied, right?

And here's something: This weird happening with the housekeeper's and my silhouettes on the wall. 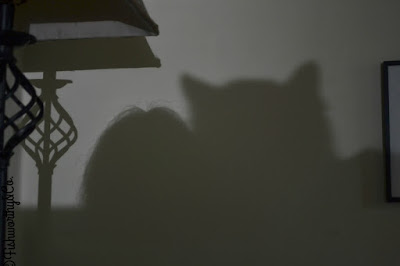 Now, I was in the far window and the sun, as bright as it was, cast my shadow on the far wall opposite. The housekeeper couldn't leave well enough alone. She had to stick her head up while sitting on the couch. Anyway, it looks like we're cuddling and I'm bigger than she is, KIK!!!!!

Shadows are fun, but this is just another instance where I notice the cool stuff and have to be the one to point it out.

Next time you're sunbathing, see if a shadow is sitting behind you!

Next time I'll be Batman,
Tom
Posted by Fr. Tom Fishworthy at 3:04 AM

Tom, I would have held up my two fingers in the Victory sign, and made sure it looked like you had antennae! LOL! After all, I have antennae on the cats in my blog logo...Cats are from space.

Oh how fun! I'm going to have to pay attention to more shadows in the future. You'll make a great Batman Tom!

You would be a good Batman!

You have a very cool shadow, Tom!

We never have that much fun here!

We dont have any flat space for shadows. Darn
Love yours though
KIK Huh? Well...

I have KIK'd on several occasions. And many more typos than I care to remember.

That shadow action is super cool, Tom. We're glad you saw it!

Tom, I loved your comment to me...and I am proud to be among your LadyCats. XX

I thought her head was the rest of your body and was wondering why your fur was parted.