We love to visit our cousins since they're only a half-hour away. Recently, when I returned home, a certain member of our party stayed behind.

Mitty's been having the time of his life. Oh, he'll be getting back here one of these days, for sure, but meanwhile, he's visiting, particularly one little kitty who's right around his age.

Here's Minnie. She's just a few weeks older than Mitty, who's about a year old now. (We'll celebrate his Gotcha Day in November) 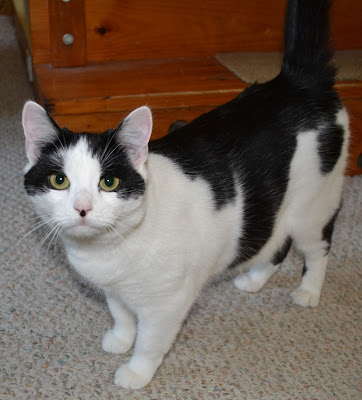 Look at the cute spot on her nose! She was rescued from the streets as a tiny kitten by my mom's daughter and her fiance.

They're ignoring each other here, but, trust me, they play a lot.

Originally (this summer), the intent was to give Minnie a playmate and find Mitty a place to go while Mom Julie was getting the house ready to sell. People in and out, it was not the best environment for little Mr. Curious since none of us are outside kitties.

Our other cousin is GubInATub, called Gubby for short and the inspiration for Mrs. Gubbers in my Father Tom novels. That came about since he reminded our mom of when she visited Brooklyn and saw elderly women leaning on windowsills, seated next to their flowerpots, talking to people out in the street. He sits on his elbows in the hole of his cube the same way.

Older at seven and more laid back, he's not interested in tussling about. 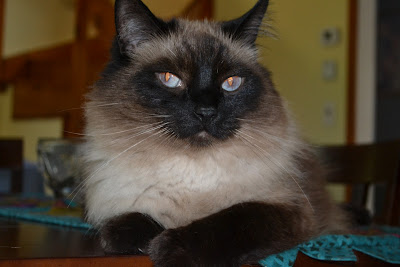 And, last but not least is the debonair Chewseph (Joseph). Another kitty rescued, very bothered by Minnie when she first arrived, now is willing to play when not composing. It's brought out the kitten in him again, he being a couple of years younger than Gubby.


White paws together, like white gloves, he's ready to play the piano and will tickle the ivories for head scratches and some treats in the nip tip jar.

So, that's been Mitty's home away from home, getting a lot of attention, play time and my human doesn't have to worry about him.

Oh, he'll be coming back. I miss the heck out of him, but I'm going over this weekend to get my nails done my meownicure and visit.

Have a good weekend, everyone!

ooo Miss Minnie is ever so pretty!

How fun that Mitty gets to spend some time with his cousin, Minnie! She's a cutie!!

PLEASE come here and do MY meownicure? Please?

We love Minnie's special mark on her sweet nose - she is gorgeous. However Chewsef has stolen our hearts with those lovely white paws and frilly collar. Now then Chewsef you tinkle the ivories and we'll sing the chorus - does anyone know the words!!??
Luv Hannah and Lucy xx xx

Your cousins are all gorgeous, but our mom is quite smitten with Chewsef. Definitely very debonair! And she likes the song, "As Time Goes By." LOL.

That is one good looking family and it looks like a fun time...mostly!

Hmmm... any kitties over there wanna play some stuff from CATS on the piano? My peep could do the caterwauling. purrs

Mitty is on vacation huh? Hope he has a good time!!

How fun that Mitty gets to spend some time with his cousin :)
Must say you have a furry good looking family !
Wish you a pawsome weekend !

Gubby looks a lot like our Thailing! I love that coy look he has.

I'm sure you'll miss Minnie, but it sounds like she's in good hands. You certainly don't want him wandering outdoors when all the rug-scuffers come in.

Having cousins is PAW-some! Sweet Minnie's nose spot. All so pretty and handsome! Purrs...

Minnie is very cute and that is a sweet little spot on her nose.

Andrea and the Celestial Kitties said...

What a lovely family those cousins are! Glad Mitty has a playmate! Why was I thinking Mitty was a girl..?

Aw, i love Minnie's beauty mark. She's gorgeous. All of 'you guys' are splendid felines indeed! And visiting family and friends for awhile is definitely a good time. Have an excellent weekend. And you know.. you all live in my home state. I was born in Bar Harbor 49 years ago!

Aw, those cousin kitties are the sweetest!

What an intriguing cast of characters!!!

That's a lovely chosen family, and Mitty is lucky to get to stay and play for awhile.

Enjoy your meownicure! And the rest of the weekend too!!!

Oh I love Minnie's little spot on her nose! So cute! I hope Mitty enjoys lots of playing and attention. Have a great weekend!

All of your cousins are beautiful! How nice that Mitty is having such a good time with them. :)

What a gorgeous kitty are - well in fact, they are all gorgeous.

So Mitty has a girlfriend and she's pretty too. Hope he enjoys his vacation.