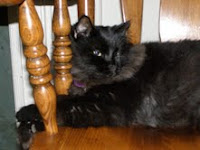 Fur like ermine, meoww! No mattes as far as this eye can see, I'm so jealous! Here is his story:

The DeLaets of Plainwell, Michigan met our friend on the church steps when they went to attend services one Sunday about four years ago. According to Beth Ann DeLaet, a columnist for the local newspaper, this kitty started greeting parishioners on the steps of the Plainwell Methodist Church.

Despite the fact that he was a very friendly little fellow, she was not taken in, no sirreee! They had two cats at home and that was enough! So, we imagine he wanted to try something else. Either that, or this was his way of dubbing his new family. Anyway, she says he followed them to their van in the parking lot, jumped in and sat between the seats as if to say, "Can we go home, now?"


They named him "Church" and he enjoys his life with the DeLaet family. They can't imagine being without him, but that does happen once in awhile. It is then that he gives in to those primal urges sending him outside for a quick refresher on his prior life. He has always returned.

By the way, she mentioned that he bears no resemblance to the cat "Church" in Stephen King's Pet Sematary. There was a cat with that name in that book? Now, that's scary! 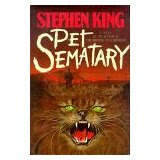 My thanks to Beth who shared her story and provided pictures of her handsome boy, prompting this from me--it's one thing to go to church, it's quite another to have Church come to you!

I know that was too corny for words, and I've given Angel Matilda indigestion, but as we all know, I have a weakness for corny jokes. Since we haven't had one in awhile, here's a chuckle as you get your Christmas shopping done:

One shopper was standing in line with another. To pass the time, they started talking about their husbands. "Mine is so hard to buy for," said one. The other said she had no problem at all. Amazed, the woman asked how she did it. "Oh," she said, "my husband's a plumber. As long as he doesn't have to drain it, flush it, stop it or mop it, he's happy."

We love the story of Church!

Thanks for telling us about the "other" Church, you need to start your own special order! Have a great weekend!!!

Father Tom,
That's a really unique name " Church "and thank you so much for the story : )

What a great story - Church really knew how to claim his home!

Further proof that Cats do the choosing!

Agreed, cats do the choosing! Church knew what he wanted and how to get it!

Father Tom, this is the OK Cats' mom. I loved the story of Church! My Fuzzy chose me (she walked in my house one day and never left), and I have to say, I feel pretty honored that she picked me. I hope that Church's family knows how special they must be to have been chosen by him!

Thanks for sharing Church's story with us.

Really enjoyed the story of Church. Your joke was cute too.

Church was waiting for the purrfect furramily to come along!
Happy Weekend!
~ Anna Sue

Are all church cats as handsome as you, Father Tom, and Church?

Thanks for introducing us to Church, Father Tom. What a nice story of how he was gotted!

Oh I adored that story of Church and what a beauty he is. So are you. I wish I could introduce you both to my mom. She loves all kitties everywhere but she just has me to love just now. That's plenty, MOL.

Thank you so much for continuing to come and see me. Head bonks.

It's nice to meet you.

What a really neat story about Church. We love to hear how kitties and their beans come together. We also like to know how they got their names.

You are really a beauty, too, Tom. So very photogenic.

"The Boys" and I are thrilled you stopped by our house at Kittens 'n Things to say hi.

It's well known that you don't want a cat but suddenly have one, because it just moves in and you have nothing to say, lol ! You don't choose the cat, the cat chooses you !
I have seen this movie from Stephen King, what a joke ! There was so much "horror" that we had to laugh ! Overdone, really !

That is such a great story about Church. What a smart kitty that one is, that is for sure. All fifteen cats here picked our Mom. She gives us food and shelter and that is important. She also had us all spayed and neutered, so we feel like we know just how Church feels about having a great home. Take care and have a wonderful week coming up.

I like hearing stories like that! When Tommy goes to church, she now looks for a kitty there--waiting to get its praise on. Before the church moved across the street to the new Home, the preacher put out bowls of food for the outside kitties...