I Brake For Bookworms 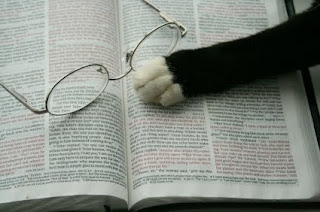 Next week is Children's Book Week. There aren't that many children's books in the rectory, only a few for when we have visitors. They're mostly picture books with trains and little puppies. Not what we have in mind, at all. 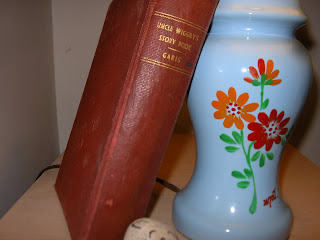 You see, I highly doubt I would even exist if a certain author didn't have this thing for talking animals and bunnies in trousers. All of the animals in Thornton W. Burgess' little animal community--Blackie The Crow, Reddy Fox and Grandfather Frog--all became friends with their readers through books. 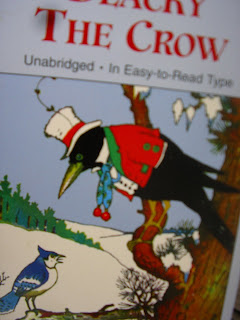 JRM: That's right, Tom. When I was growing up, my father especially talked about animals and their adventures. My grandfather gave him Uncle Wiggly Longears which he handed down to me. Maybe that's what inspired your special role at Temptation Parish, why you're a puss preaching the straight and narrow.

Tom: As long as I don't have to walk the straight and narrow, I'd never fit. Too fat. Hehehe!

Tom: Okay, okay, a priest. That is a pretty important role.

JRM: You're not really a priest, Tom. The housekeeper just gave you the name Father Tom.

Tom: Can't I be an honorary priest? I forgive sins, don't I?

JRM: Well, you're in on the absolution and penances..

JRM: You're in the rectory den with the holy water and nips..

JRM: You officiate at weddings and funerals..so I guess you are!

Tom: Weddings I only dig if they throw catnip, and funerals I'm always afraid someone'll grab me and stick me in the coffin.

Tom: Don't get any ideas. That's one adventure I can do without! 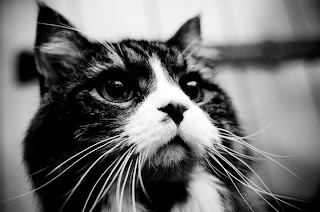 If I ever get married (I am 13 so probably not going to happen), you can perform my wedding! This was great post and mama has many fond memories of the books she read as a child. I have a 4 year old human sister and she loves books, too!

Oh dear, being trapped in a coffin sounds very scary!

Thomas O'Toole would like to assure you Tom, that 'those' are long gone.

We love your spectacles Tom - we bet you look very cute reading your books with them resting on your sweet little nose. We were wondering though aren't they a little large for you!?!

Hope the children will read, they are a little lazy nowadays !

There is nip in your rectory! We'll have to think of a way to invite ourselves over.

We think that coffin might be very dark and skeery!!

Books are a good thing...just not quite as good as nip! Y'all have a great weekend!

Tom, we love books. They nail Mommy to the sofa for hours and we get TONS of rubbins. Bliss!

" Trapped in a coffin " that's scary though !
But I like the wedding part " throw catnip " must be FUN WEDDING : )

That is such a good idea to have a Children's book week. Our Mom loves books and reads all the time so we think it is important that children learn to enjoy books. Take care and have a great day.

You can officiate at mine and Tuna Katt's wedding next year. That would be great. We pay in nip and tuna. Books are good but blogs are even better!