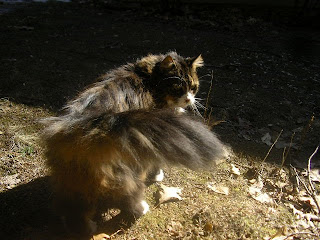 "It's a jungle out there," I think is how the expression goes. Well, whoever said that never thought about the jungle that is happening under our very noses.

I had a chance to get out a little bit this week. It was a beautiful day and I was busy enjoying the sunshine when I started hearing all sorts of noises and couldn't figure out where they were coming from. There was scratching and sounds of dropped rocks, chattering conversations, and animal burps, probably from eating acorns. 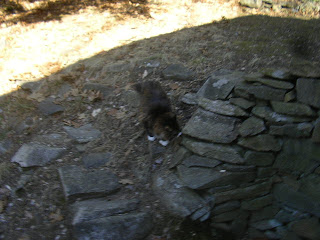 I had to investigate, of course, but not a single critter stuck his head out while I was watching, which disappointed me no end. I even hid, waiting. I guess they decided not to chance it and headed out somewhere else. It suddenly did get awfully quiet.

It's really quiet here. Now is the best time for me to post since I can't get near the computer during the week. If they only knew, hehehe!

It's been a couple of weeks since I ended a post with a joke, but before I tell you all a new one, I wanted to let you know that I've always been a big fan of the comedians on the old shows. I like Jackie Gleason, Red Skelton, Milton Berle and others I can't recall right now. What was so nice about them is they all shared their jokes with each other in the same spirit that I share this joke with you:

A man felt so bad after running over a cat with his car. He couldn't just leave the animal and go about his business, so he went up to the door of the house right where it happened and knocked. A woman answered and he apologized, "I'm so sorry, I just ran over your cat, but I'll be happy to replace it." She looked him over and said, "Well, hurry up, then, there's a mouse in the kitchen!"

Great joke. That is too bad you did't find out what was making those noises. Bet it was a squirrel. Enjoy your weekend.

You made us smile with your joke. You'll have to put your paw down and demand more computer time!

he he- your jokes are always funny. Maybe it was a mousie making all that noise. They are supposed to be as quiet as a "church mouse" but sometimes dey are very noisy.

"Hurry up, there's a mouse in the kitchen" HAH! I love that one.

Mom's smiling from your joke!

Looks like it is indeed a jungle over there! Well, you are one lucky kitty - we would love to be in an open area like yours!

Those outdoor creatures are SO antisocial! They never seem to want to become dinner, um, I mean, make new friends.

Be patient, I am sure those outdoor creatures will eventually show their faces - at least to gather more acorns.

I am glad you are enjoying the X-Paws. We are planning to do one featuring some cats= bloggers in mid-November. My feline sister Rosie will most likely take the lead in this episode.

Hello Tom! Nice to meet you. What a lovely space for exploring you have!

That was quite an adventure you had, is that where you found the joke? Hey, my Dad remembers those dudes too, he said that was back when comedians were funny! Enjoy the rest of the weekend!

Too bad you didn't get to see any of those outdoor creatures!! They musta been scared of you!!!

The joke made us giggle!

That's too bad the critters outside stopped making noise when you came to see them. We don't go outside but we have a critter in our crawl space that we can hear through the floor but no one will let us go into the crawl space to visit. Spoil sports.

A big thanks to all of you for your comments. To those of you who are new to my blog, welcome! And a *hug* to lupie who became my 40th follower. I'm so excited! Hope you all have a wonderful week!

Tom
That was quite the adventure,it's just too bad that none of those critters were nice enough to show their faces to you.

Thanks for stopping by the other day. It was nice meeting you and I hope we can become friends. You have a nice place here. Love the photos of you outside.