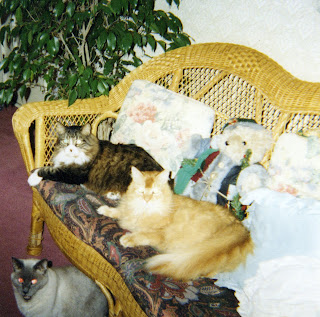 The cat on the wicker seat next to me is Vinny.
I know, with a name like that you would think he would have black fur and look a little like Al Pacino in his younger days. This golden haybag is the northern Italy version, but that's not why he's a feline paisan, or was.
He got the name Vinny because he, like me, likes pasta sauce with parmesan and, any time there's a spaghetti supper, he's first in line. We have other things in common, too, but to think about them would hurt too much.
This photo was taken in better days when the two of us got along and he was not jealously threatening to defrock me. I don't know how it happened, but we became enemies. It's a curious thing, too--at times our intense dislike can turn half-hearted, especially if there's trouble or he's sick. Then, I get worried and forget what all the fuss is about.
Anyway, his last name is Blackwhisker. You can't see it, but he has one black whisker on his left side. I say it's growing out of his little black heart. I don't know what turned him against me, but I suspect it is this blog.
Long time ago, he and I were talking about blogs. He said I should have one. I said he should have one. Well, the one who actually started putting one together was me. I guess he got jealous because I actually went through with it while he was out cattin' around. Now, I get to talk to everybody, am one of the main characters in a book, and he's jealous. Well, la-di-da.
I think I've mentioned the fact that he belongs to Patsy Gubbers, a sweet old lady who has a comb-over to hide thinning hair, wears crazy earrings, and brings me treats. By the way, the one underneath us in the photo--the Siamese--that's Bentley. It's not a very flattering shot of him. He's actually a therapy cat, the sight of him usually more benign.
Getting back to Vinny. What he says and the way he acts is just intolerable. It's just that I've lost my patience with him. You know what really scares me? I heard rumors that if anything ever happened to Patsy, the housekeeper wouldn't mind having another cat and we'd take him in...can you imagine? If there were ever a time to play fast gun with the rosary, this is it. Or, maybe I could start putting mouse offerings on the altar..
--Tom
Posted by Fr. Tom Fishworthy at 3:50 AM

Tom, thank you for introducing us to Vinny, he's very fine fellow. Could it be that he's been unfairly maligned by the neighbourhood? Could it be time for you both to 'fess up to what causes your spats? Most fall outs are six of one and half a dozen of the other. Your concern for him when he's poorly suggests that a little healing between the two could happen.

I can tell deep down that you are not really enemies, maybe that half-hearted dislike could diminish too if necessary. You just never know who is going to need help Tom, so it's best to be flexible. Have a joyful weekend my friend!

That's what I get with my multi-clawed paws! Anyway, as I was saying before I messed up--

If we patched things up between us, I'd have nothing to complain about and, of course, no material. I heard he made a crack about where I came from. Well, I got back by saying he didn't come from the other side of the tracks, he came from the middle of the tracks... after a train went by!

But Tom, when you have humans around your home, there is ALWAYS something to complain about