Day 3 of Lent or Move Over Van Gogh

Third day of peaceful slumber, ignoring frequent outbursts coming from the parish I call home, as well as an asylum of sorts.

I don't know what Will and Jack (I drop the "Father" part 'cause it's just you and me) gave up for Lent. I'll have to closely observe since neither of them talked about it. They're just doing some extra praying I noticed, but that could be anything from thanks for one of Mary Lou's fish chowders--hey, I'll put my paws together for that--or pleading with the Lord to bring them a contractor who'll do things for free...who knows?

I've taken up painting. I draw the picture first, put in the numbers and then use my brush. Isn't that the way to do it? 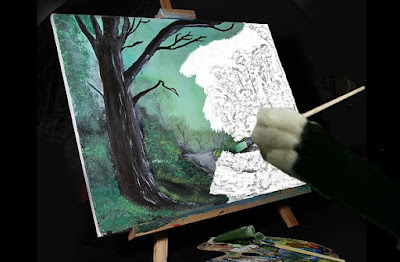 Being a cat, my creative genius includes the capturing of chirps, beez buzzing, streams rippling and trees who are pleading with me for leaves..

Way to go Tom!
How about one of those wonderful Last Supper paint by numbers?

My daughter took an art class and they taught her to sketch toe picture before painting it. Yours is lovely