I really like the concept of going back and repeating a story or sharing a photograph. Especially with how the world is today, it's nice to think of a calmer time when looking over your shoulder meant making sure loved ones were keeping up, not whether they were safe.

Going back means revisiting past church cat Toms - this entry in particular, written after J.D. Salinger's death when Tom, firmly believing he is as good a catcher in the rye as anyone, takes an imaginary trip to the writer's home: 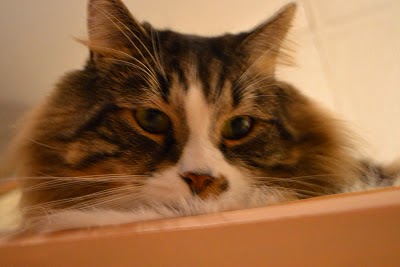 I met him years ago but I don't remember
how or when.

I do recall wandering a long, overgrown drive thinking how his crowd of admirers had turned into a company of weeds. But, that was the whole point. I stopped to take in the house on the hilltop. That, too, appeared left to its own devices.

You wouldn't think someone like me, short and covered in fur would have easy access to one of the greatest writers of our time and a recluse, at that. But, I did. All I needed was a doorstep.

He unlatches the door to let me in. There are papers everywhere. Magazines. Books. One without a cover. I notice the door has a cat flap.

"Haven't seen you around here."

Mr. Salinger, I came specially to see you. I must discuss writing.

As with those who constantly converse with inner thoughts, he is in tune with mine.

"Write for the fun of it," he says, shuffling over to the cabinet. He wore his aura like a cloak.

I knew this was a sore spot, but I had to ask.

"Well--" His voice became hesitant yet at the same time contained a vehemence restrained. "It's something you need as a writer but can't control it once you get it."

There were sardines now heaped upon a saucer with tiny white flowers in a blue border. As I ate, I thought about what he said. It was true. If I became famous, it would change everything, every part of my life. I picked up the last crumb of fish.

It can still be enjoyable, can't it?

I looked up. He had left me alone.

I turned the corner and entered a cozy area filled with ever more papers, books, and pillows in dazzling, reflected light. My famous author and benefactor was absorbed in his work. There was a calm, as if he were some creative sculptor absorbed in the modeling of his own imaginative clay.

I turned to leave.

"Write for the joy," I heard behind me.

I smile as only a cat can, with backside for emphasis, a gesture to which he can undoubtedly relate.

Rest in peace, kind sir. The sardines were delicious. 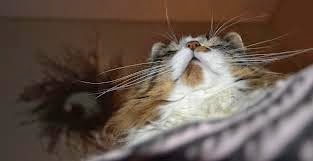 And for the joy you bring to others.

We sure did enjoy reading this!

I agree it's a good idea to repeat and share stories and photos. And this is such a beautiful story of angel Tom's imaginary trip. Love the conversation between him and the writer.

Beautiful post, Julie! I have tears in my eyes as i think of both Salinger and Tom. Write for the joy. So very true. Hugs to you and your kitties!

What a lovely story.

I don’t remember reading this and thoroughly enjoyed it. What an important lesson for us all.

We weren't reading your blog when this originally posted, so it was new and made us smile for the first time today. Such a wonderful scene!

Thanks for sharing this with all of us again.

That's purrfect and lovely. Thank you for such a thoughtful and beautiful post, Julie.

What a good story!

OMC this is beautiful! It made me all teary-eyed but in a good way. I am imagining these two wonderful characters have had a chance to meet again.